There are many ways to create a new React application. The React documentation recommends the Create React App utility when you are creating a brand new single-page application.

Open a terminal window, find a suitable parent directory, and then enter the following command to create a new React project called react-microblog:

The npx command comes with Node.js, along with npm which you may be more familiar with. Its purpose is to execute Node.js packages. The first argument to npx is the package to execute, which is called create-react-app. Additional arguments are passed to this package once it runs. The Create React App package takes the name of the React project to create as an argument.

You may have noticed that you did not need to install create-react-app prior to running it. The nice thing about npx is that it downloads and runs the requested package on the fly.

Let's have a look at the newly created project. First change into the react-microblog directory:

Get a directory listing (ls on Unix and Mac, dir on Windows) to familiarize yourself with your new project.

Depending on the version of Create React App that you use the contents of the project may not match mine exactly, but you should expect to have the following files and directories:

Before you continue, you'd want to make sure that the starter project works well. To start the React development web server, run the following command:

This command runs an initial development build, and creates a web server that serves the React application at the http://localhost:3000 URL. It also opens this URL in your default web browser. Figure 2.1 shows what you should see in your browser. 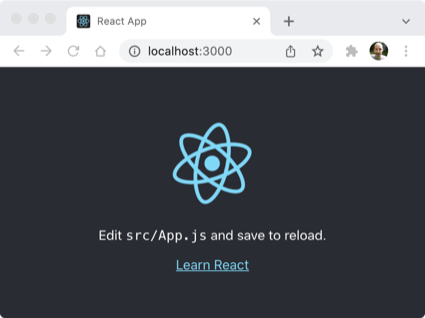